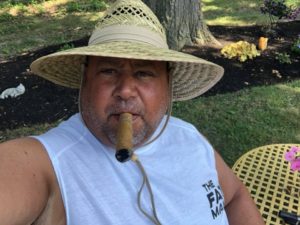 The fat man was born April of 2016, the brainchild of Anthony Cristillo.  After Anthony was jestfully referred to as the fat man on a local media blog while working on a political campaign, embracing the joke, he solidified the help of a friend (Tom Acri) in the apparel business.  A logo was created, shirts were picked, the fat man filled the back of his pickup, and started doing his thing.   Two years later here we are, building a website.  Although the fat man does his best work on the street, he is excited about selling his stuff on the world wide web, so place your orders now…. Just not during dinner